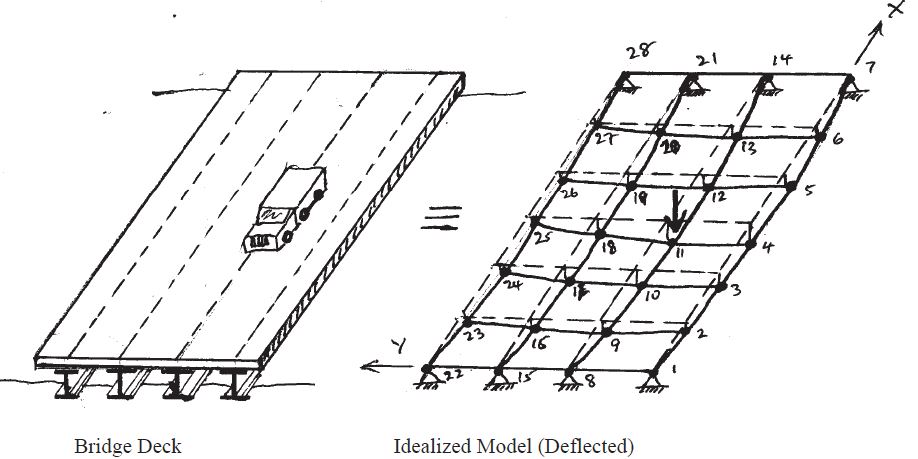 Most computer programs have the ability of handling three-node or triangular plate elements, which are typically treated as a special case of the four-node basic element. Following the general plate theory, plate elements are assumed have three allowed displacements at each node; translation perpendicular to the plate and rotations about two perpendicular axes in the plane of the plate. The typical output includes the moments usually given as moment per unit width of the face of the elements and the shear in the plate. This form of output is convenient because the moments may be directly used to design the deck.

Shell elements: Shell elements are also developed assuming that the thickness of the component is small relative to the other two dimensions and are also modeled by their middle surface. They differ from plate elements in that they are considered to have six degrees of freedom at each node, three translations and three rotations.

Typically the rotation about the axis perpendicular to the surface at a node is eliminated leaving only five degrees of freedom per node. Shell elements may be used to model two dimensional plate components or three-dimensional shell components. Commercially available computer programs typically allow three-node and four-node elements.

The typical output includes the moments usually given as moment per unit width of the face of the elements and the shear and axial loads in the element. Due to the inclusion of the translations in the plane of the elements, shell elements may be used as part of a three-dimensional model to analyze both the deck and the girders.

Solid elements: Solid elements may be used to model both thin and thick components. The thickness of the component may be divided into several layers or, for thin components such as decks, may be modeled using one layer. The solid elements are developed assuming three translations at each node and the rotations are not considered in the development.

The typical output includes the forces in the direction of the three degrees of freedom at the nodes. Most computer programs have the ability to determine the surface stresses of the solid elements. This form of output is not convenient because these forces or stresses need to be converted to moments that may be used to design the deck.

Notice that, theoretically, there should be no force perpendicular to the free surface of an element. However, due to rounding off errors, a small force is typically calculated. Similar to shell elements, due to the inclusion of all translations in the development of the elements, solid elements may be used as part of a three-dimensional model to analyze both the deck and the girders. Element size and aspect ratio: The accuracy of the results of a finite element model increases as the element size decreases.

The required size of elements is smaller at areas where high loads exist such as location of applied concentrated loads and reactions. For a deck slab, the dividing the width between the girders to five or more girders typically yields accurate results. The aspect ratio of the element length-to-width ratio for plate and shell elements and longest-to-shortest side length ratio for solid elements and the corner angles should be kept within the values recommended by the developer of the computer program.

The torsional inertia of the section is the summation of the inertias of the individual rectangles. As the deck slab is used in both the longitudinal members and transverse members then the inertia of this rectangle is halved. This only relates to the Torsional Inertia, the full section is used to calculate the Bending Inertia. When the deck is cantilevered from the edge of the main deck beams it is convenient to extend the grillage to the parapet beam as shown in Fig.

This will simplify the application of footway loading and accidental wheel loading. However the torsional effects in the edge beam can be significantly overestimated in a beam and slab type deck if the members are not modelled correctly. Most of the cantilever effects should induce bending in the deck slab with secondary torsional effects being induced in the supporting edge beams. If a simple two dimensional 2D grillage is used then the bending effects from the cantilever will be resisted by torsion in the edge beam.

This will overestimate the torsion in the edge beam and underestimate the bending in the deck. Some grillage programs allow the centriods of the members to be offset from the 2D plane as shown in Fig. Alternatively a three dimensional model may be used by including rigid, vertical, dummy members into the model, although this solution does make the geometry more complicated. Most grillage programs will allow the supports to be modelled as free, rigid or sprung. Spring supports are used to model the elastic deformation either of the bearing or of the support structure.

This will enable a suitable bearing to be chosen for the grillage model. Alternatively the grillage analysis can be carried out with rigid vertical supports and modified later. Using the bearing layout shown at the bottom of the Choice of Bearings web page:. When using spring supports it is usual to have to fix one bearing in the vertical direction to achieve a stable solution.

A grillage does not analyse in-plane loading so any longitudinal or transverse restraint will not be modelled. All loading is proportioned to the grillage members and grillage joints nodes before the moments, shears and torsions are calculated. Many programs have the facility for applying patch loads and point loads which do not necessarily coincide with joints or members.

The program will distribute these loads to the members before calculating the moments, shears and torsion effects.

There are a number of ways of proportioning the loads to the joints if the program does not have this facility. The 48kN point load shown acting within a square grid can be proportioned to a pair of opposite members and then again to the joints as shown. This distribution will achieve sufficiently accurate results.

It is convenient to apply all loads to the structure as nominal loads.

Load factors can be applied to the combination cases to avoid inputting numerous load cases. Consequently load cases should not be too complex. For example carriageway construction mm thick is considered in BD21 as mm surfacing with 50mm fill and should be applied as two load cases as different load factors are applied to fill than to surfacing. Dead load is applied to the main longitudinal members. Some programs will automatically generate dead load by applying a density to the cross-sectional area of the member.

Care is needed to avoid double accounting for the weight of the deck slab.